[Hyundai Jonkyo (Modern Religion in Korean) is a prominent monthly magazine published by the “International Religious Affairs Research Institute” established in 1970. In particular, it deals with a great amount of information on the status of emerging religions in the Protestant world. When you search for “religious magazines” in Korean on the Internet, it is always at the top. The original article can be found here.]

The Unification Church (CEO: Hak Ja Han, Family Federation for World Peace and Unification) built “Cheonseungjeon” and a café, “Hanwon House” in Seorak-myeon, Gapyeong-gun, Gyeonggi-do. “Cheonseungjeon” is an education and welfare facility for elderly people. “Hanwon House” is characterized by its traditional Hanok building. At the dedication ceremony of the Cheonseungjeon and Hanwonjeon, Hak Ja Han emphasized that she would represent a sample of Heaven on Earth. It may be seen as an event for showing off power, but in reality, it is for the deification of Hak Ja Han. After the death of Sun Myung Moon, there was a family fight over the succession, but it seems like the governance of Hak Ja Han has been established. 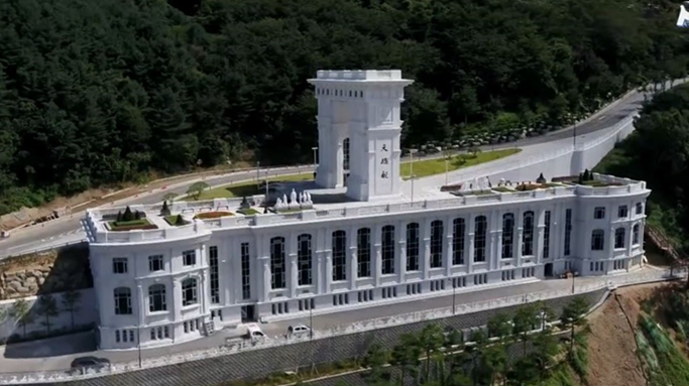 The Unification Church spurred the construction of a sacred site. “Cheonseungjeon” and “Hanwon House” are newly constructed.

On September 28, “Cheonseungjeon” and “Hanwon House” were dedicated in Cheongpyeong, which is being built as a sacred site for the Unification Church. The “Cheonseungjeon” was built to commemorate the Unification Church’s “Foundation Day” event in 2013 and the beginning of the Unification Church Kingdom, the Kingdom of Heavenly Peace and Unification. The buildings’ completions were in 2020. The Cheonseungjeon is built on a site of 6,000 m2 and has 3 stories underground and 5 stories above ground. According to the Unification Church, Cheonseungjeon consists of “Cheonilmun” in the shape of an huge triumphal arch with a height of 21 m and a width of 20 m and the base (the part that is one level higher than the foundation of the building) has three floors with a total floor area of 4,000 m2 with education and welfare facilities for elderly people plus office spaces. The Hanok Cafe “Hanwon House”, is described as “A place where Heavenly Parents rest. A place for all to rest. A pleasure place for seeing nature.” 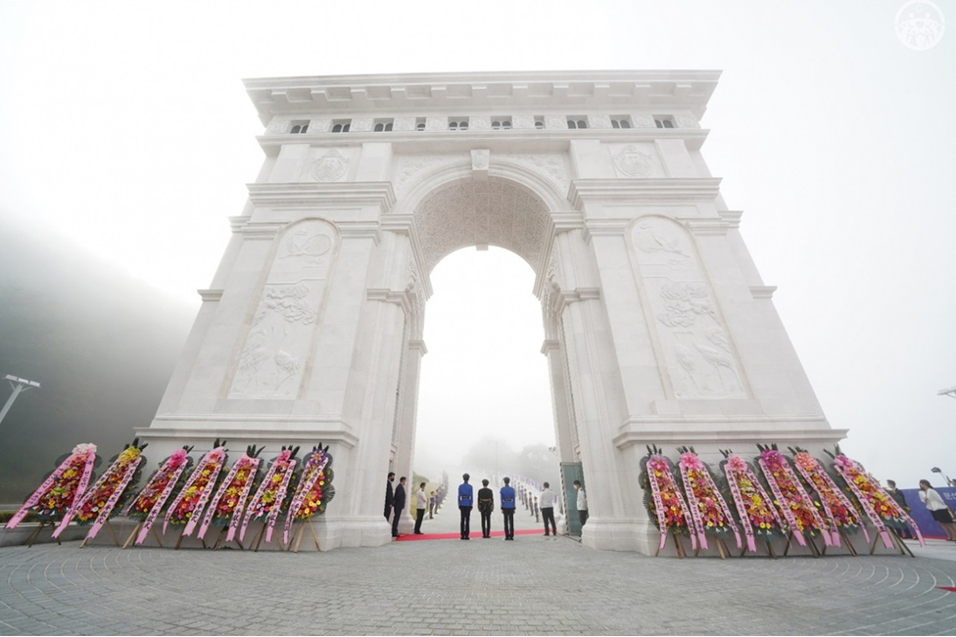 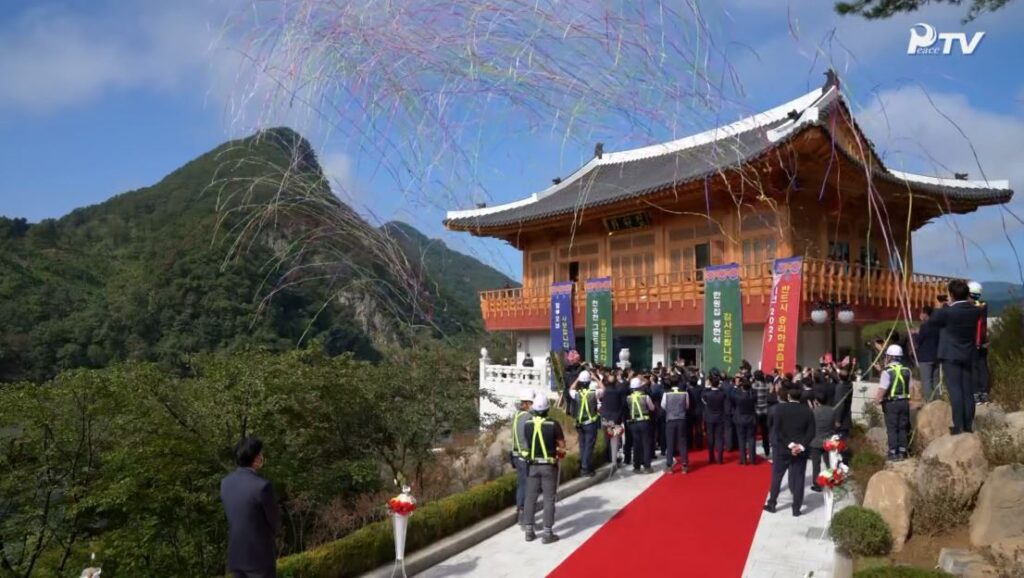 Deification revealed in architecture.
Where has Sun Myung Moon gone?

The continued construction by the Unification Church seems to be purposed for both expansion and as a display of power. However, if you look at the two statues of Hak Ja Han in the outdoor garden of Cheonseungjeon, the interpretation is different. The Unification Church side introduced the first 4m 30cm statue including the base as a representation of Hak Ja Han, who declared the Foundation Day for the completion of church doctrine despite the death of Sun Myung Moon. The second statue is said to contain the journey of Hak Ja Han who had established Cheon Il Guk in 2020 after the Foundation Day in 2013. When looking at the statues alone, the status and achievements of Han, the current head of the Unification Church, appear to be higher than that of the founder, Sun Myung Moon. In addition, on one side of the Cheonilmun, only the signature of Hak Ja Han is engraved. 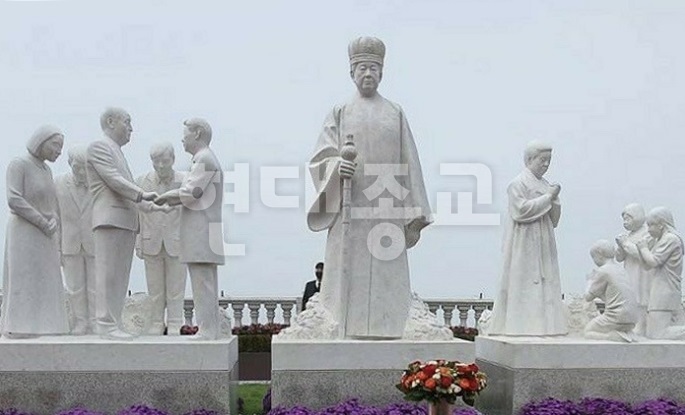 Sculpture in the shape of Hak Ja Han, who declared the Foundation Day. 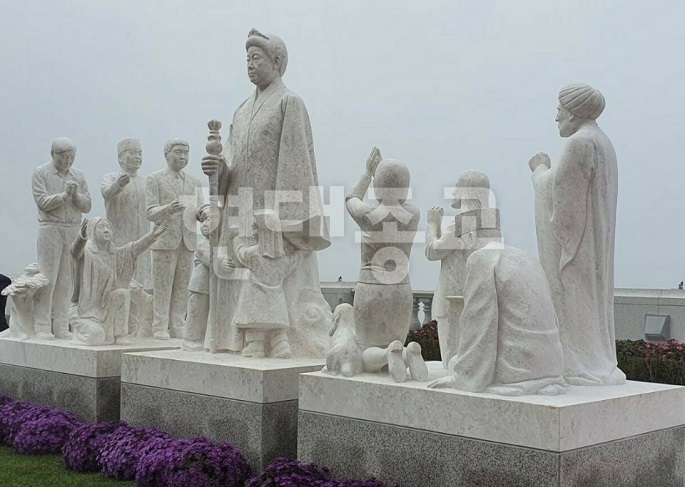 In the outdoor garden of the Cheonseungjeon, is located the imagery statue of Hak Ja Han who is attempting the settlement of the Kingdom of the Unification Church.

In her autobiography, Han emphasized the doctrine of “Only Begotten Daughter”

What is the reason for the endless deification of Hak Ja Han? Is it merely because of the greed of Han? Why do even high-ranking executives who may have learned the doctrine of the Unification Church from Sun Myung Moon not stop Han? Although I cannot know all of their inner situation, it seems that the current move is possible because the doctrine of the deification of Hak Ja Han was completed. On February 4th, Hak Ja Han published an autobiography, 『Mother of Peace』. In her autobiography, Han said, “With the fall of the ancestors of mankind, the male-centered history unfolded, centered on the status of the Heavenly Father, the masculine aspect of God”. She pointed out:
“The status of Heavenly Mother, the female aspect of God, was concealed, and God was not able to become Heavenly Parent”. At the same time, she insisted, “(I am informing) the truth of the Heavenly Providence in order to restore the status of Heavenly Parents.” “(Currently) God is developing the providence centered on a female mother (Only Begotten Daughter)”. In simple terms, she reveals that she is in the same position as Sun Myung Moon, and that her activities are the Will of Heaven.

Through her autobiography, Hak Ja Han reveals that the Only Begotten Daughter was completed through the female genealogy leading to first maternal grandmother, Won-mo Jo, then, mother Soon-ae Hong, and finally, Hak Ja Han herself. The autobiography maintains that there is no problem with the doctrine of a female Messiah. There is no reason for high-ranking executives who have lost their positions after Moon’s death to deny the doctrine of the “Only Begotten Daughter”. This is because Hak Ja Han must exist in order for them to exist. However, they cannot rule out Sun Myung Moon. That is because the doctrine of the “Only Begotten Daughter” cannot be established without Sun Myung Moon. Considering this situation, it is expected that the Unification Church will solidify the Hak Ja Han-centered system in the future, but must reconcile with Sun Myung Moon, who is a necessary symbolic figure for the completion of their doctrine.